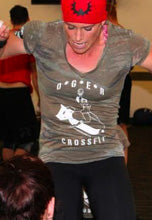 I’ve been an active individual my entire life; dancing throughout my childhood and into college, while running track and playing soccer and volleyball in my adolescence. However it wasn’t until I ditched the globo gym and started Crossfit in June of 2012 that I realized the true success that results from perseverance and determination. Now, nearly two years later, I am an active member of my box, OGER Crossfit in Seattle, WA. I’ve also been a member of the box’s Juggernaughts Olympic Weightlifting Team since August 2013. Crossfit not only helped me find my “home away from home,” it also helped me realize my potential when it came to fitness. I can’t tell you the amount of times I said, “I’ll never be able to do a pull-up!” and now, I’m able to kip with the best of them. I am proud to be a WOD Gear Ambassador and promote the community and strength that this brand builds. My younger sister who trains at Team Crossfit Academy in Monrovia, CA (along with the rest of my family) is the one who introduced me to WOD Gear . . . and even though we are nearly 1,200 miles apart, when I wear WOD Gear, I feel almost as if she and I are training right there next to each other- and that’s what Crossfit and WOD Gear is all about.