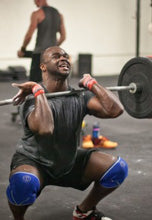 I have always enjoyed being on a team and participating in sports. I ran track in high school but never really got into weightlifting other than in the preseason. After college I began truly lifting weights in a bodybuilding capacity (I had Arnold's book and everything). Though I was getting bigger and somewhat stronger, I certainly wasn't becoming more fit. After a year or so I was bored out of my globo gym mind!

Enter my first season of rugby in spring of 2011. I had recently gotten off of the couch the month before. After the season was over I was looking for something to "get in better shape" for the fall season. A co-worker told me about CrossFit and that's all this nerd needed to hear. I immediately began researching everything I could find online and finally showed up for the last novice WOD in May. I thought I was gonna die.... but I was hooked.

After I was resuscitated, I neatly folded my ego, placed it on the welcome mat outside my box, and went to work soaking up every bit of info I could. 7 months in, CF is up to #3 on my list of "Most Positive Stuff I've Ever Encountered Period" (#1 being God and #2 my daughter).

At this point I'm still focused on one thing in CF.... and that's being better than yesterday me. I still have a mountain of skills to learn and have yet to even attempt many of the "girls" and "benchmarks", but I'm enjoying the ride and the awesome community of athletes that I've met along the way. I'm continually amazed at the things that we are initially unaware that we have the ability to do. CrossFit brings those things out of people in a way that I've never seen. I can't wait to experience more.